Aquamarine: The Legend Of The Sea Gem - Winsor Bishop
Our Store 01603 620 638 Book an appointment
My Account 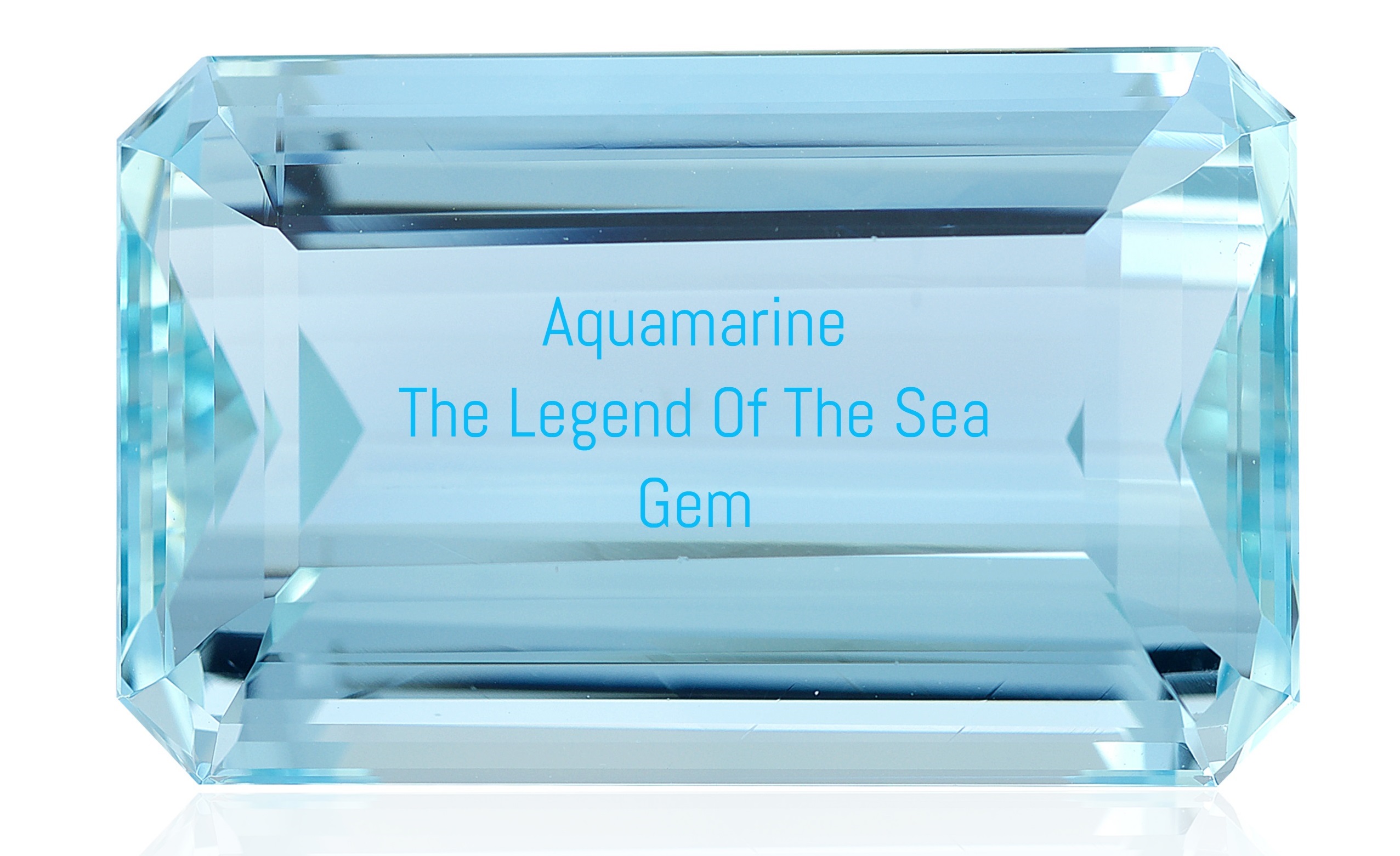 “The Myth of Thalassic Aquamarine,

Worn to Ward off Sirens Song,

And Hush Deep Waves When Swell is Strong.“

The mystical gemstone, Aquamarine is steeped in historic legend. Since records began this alluring gem’s unique beauty has captivated the imagination, inspired mythology and been admired and adorned as decorative jewellery.

The Ancient Greek civilisation attributed the existence of the precious Aquamarine to their God Poseidon who, according to legend, was said to have crafted the stone straight from the waters of the sea.

The word Aquamarine is derived from the Latin “Aqua” meaning “Water” combined with the Latin “Marina” which can be translated as “From the Sea”, thus the beautiful oceanic blue-green gemstone can be directly interpreted as “Water of The Sea”. The birthstone for March, the Aquamarines water based legends have roots also within the Piscean zodiac sign. 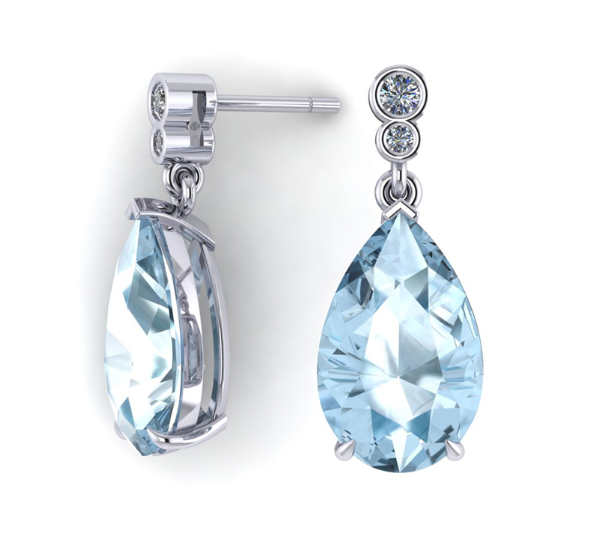 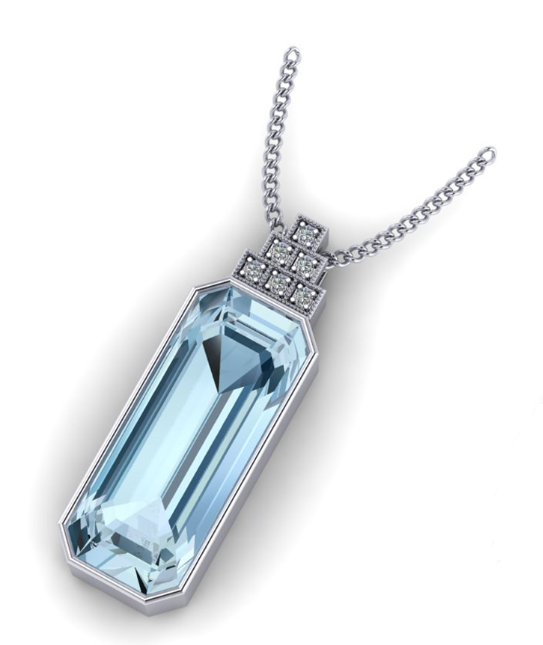 em was worn also by mariners, Navies, traders, and fishermen as a protective talisman to ward against the wrath of the sea. Ancient folklore also suggests that sailors would wear a defensive Aquamarine charm to protect them against the perilous calls of fabled sea sirens who’s enchanting song would carry them down to the depths.

The Gift of the Mermaid.

For centuries the Aquamarine has been synonymous with the mysteries of the ocean and its most famously fantastical creature, the mermaid. It was believed by some ancient civilizations that the mermaids generously gifted humans their precious blue-green sea gem and it was thought by others that the mermaids lost their treasure chest full of jewels and the Aquamarine gems were then washed ashore to be claimed by humans. Folktales from these times also indicate that ancient sailors believed the iridescent scales of the mermaids beautiful tails were adorned with these stunning gemstones. 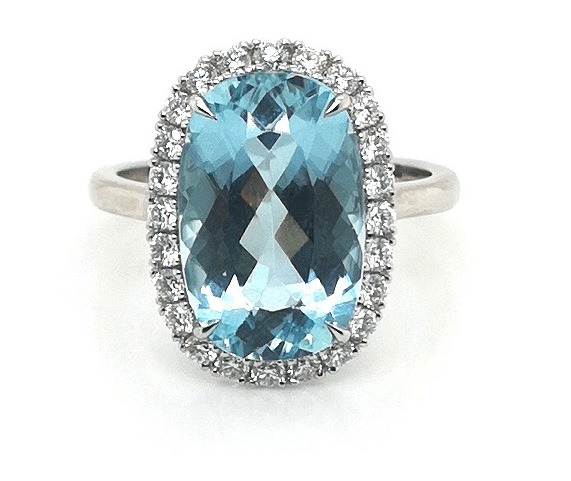 From the Heart of the Ocean to the Crown Jewels.

The rare beauty and alluring mystery of the Aquamarine has long fascinated the historically rich and powerful. Royal families worldwide have a special affinity with this irresistible gemstone, setting them within their crown jewels, including the British Royal Family.

One of the most captivating places on the planet, Brazil has always been a major source of supplying the world with the “Treasure of the Sea” and in 1953 the President of Brazil gifted Her Majesty Queen Elizabeth II the most luxurious Aquamarine necklace and earrings on behalf of the people of Brazil for her coronation.

Struck with the irresistible and enchanting beauty of the Aquamarines, the Queen commissioned a decadent tiara set with more Aquamarine generously gifted from Brazil to complete the Royal suite.

Another Royal iconic Aquamarine is the delightfully sophisticated Aqua ring commissioned for and worn with such grace by Diana, Princess of Wales.

At Winsor Bishop we have been inspired by the legends of the sea-gem as well as the decadent jewels of royalty. The mesmerizing beauty of Aquamarine is undeniable, it is crystal clear to see why we appreciate the valued gem of ancient lineage, as well as it having its place within Royal lineage.

Introducing Our Royal Aquamarine & Trillion Cut Diamond Ring – Inspired By The Gemstones Of Royalty, This Majestic 11.68 Carat, Crystal Clear Sea-Water Blue Aquamarine Has Been Faceted Into A Unique Square Cut.

Adorned With Rare-Shaped Trillion Cut Diamond Side Stones And Set In A Glistening Platinum Setting, This Special Ring Is Fit For A Princess. 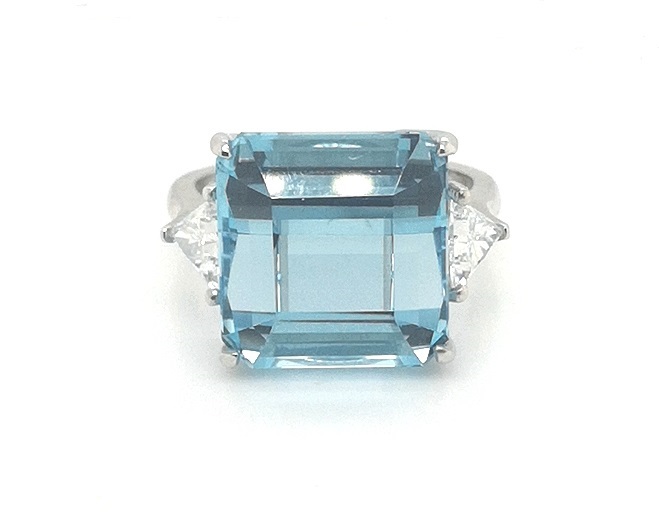 A Flowing Halo Of Scallop-Set Diamonds Swirl Around The Magnificent Centre Gem Like A Wave Caressing The Shore. Further To This A Diamond Set Bale Fitting With Subtle Articulation Allows The Maximum Amount Of Light To Reflect And Refract, Enhancing The Beauty And Majesty Of This Pendant. 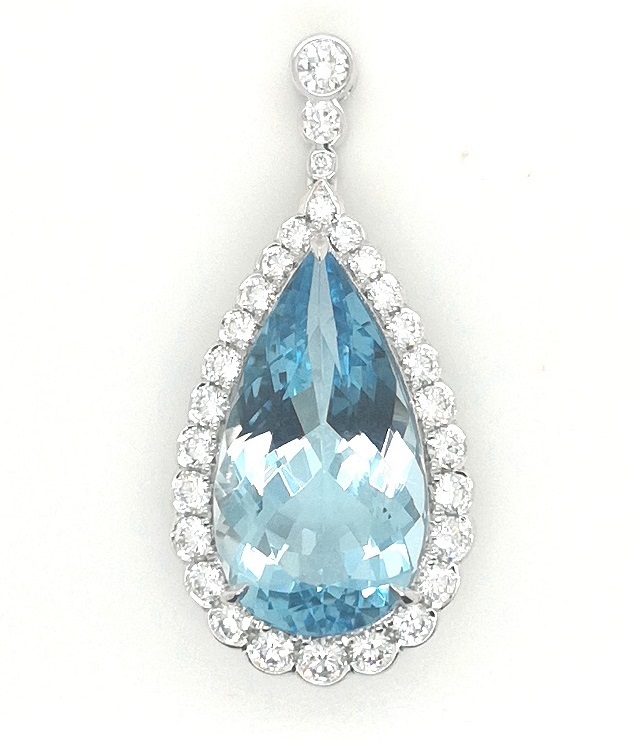 Explore Winsor Bishops very own collection of unique Aquamarine jewellery and become part of The Legend of the Sea Gem.

This entry was posted in Aquamarine, Jewellery and tagged on 11th March 2021 by admin